Our April 26th Webinar, “On Track: Hot Topics in Rail” 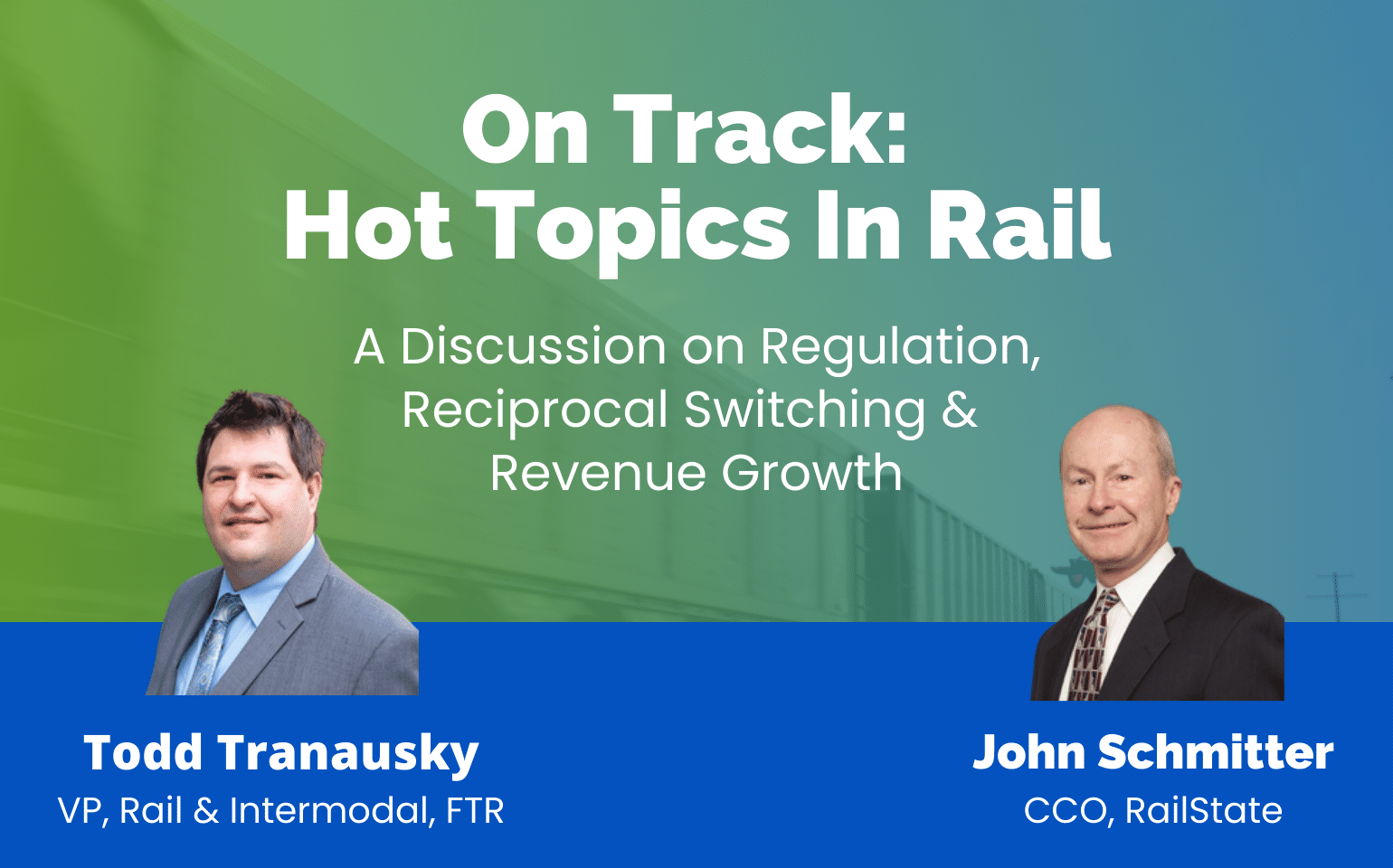 On April 26th, RailState hosted our webinar: “On Track: Hot Topics in Rail.” We were thrilled with the turnout and the discussion! Thank you to everyone who made it such a great event.

FTR’s VP of Rail and Intermodal, Todd Tranausky, joined RailState’s Co-Founder and CCO, John Schmitter, for an engaging dialogue around today’s hottest topics in the rail industry. They focused on regulation within the rail industry (both present and future); the pros and cons of reciprocal switching; and the future of rail revenue growth.

In case you missed it, here’s a breakdown of the discussion.

John asked, “Will service issues boost momentum for more regulation?” Todd acknowledged that the current Service Transportation Board has demonstrated an interest in “looking at things differently,” and in stepping up to address problems. He cited recent STB hearings on rail service issues as evidence the board is considering actions to encourage the railroads to increase capacity, in order to provide more consistent service to shippers. Perhaps the board will use directed service orders, or simply make it easier to push forward service-friendly remedies? The trends point in this direction.

Reciprocal Switching
Todd’s discussion on reciprocal switching highlighted its long regulatory journey. While the proceedings have been active since 2011, there’s been a recent boost in momentum around reciprocal switching. What’s creating the momentum? A combination of changing chairmanship and increased service issues.

What some don’t realize is that reciprocal switching is already in practice along many parts of the network, thanks to contractual agreements. Railroads, however, don’t want to be forced to implement it, and therein lies the core issue.

How does it work in our neighboring country? In Canada, shippers within a 30km radius of an interchange are able to obtain service from an alternate carrier. Could we use the same system in the U.S.? Not really. The networks are very different between the two countries — you have a lot more interchanges in the US and a lot more Class 1 railroads that are capacity constrained. Were we to implement some sort of reciprocal switching system, Todd noted we’d need to set expectations around it. Switching won’t help everyone — only those who work close to interchanges. To really address service issues, the board would need to take other actions, like changing the “bottleneck” rule. While railroads don’t support mandated switching, it could be additive, and help them grow volumes over the long term (the industry’s central issue).

Rail Revenue Growth
The final topic was revenue growth. John explained that railroads have been successful over time in growing revenue by managing up-prices, aggressively cutting costs, and improving efficiency. Volume, however, has remained flat for almost 20 years — there’s been a marked decline in non-intermodal carloads.

As Todd stated, “Railroads can’t cut their way to prosperity.” They have to pivot their approach in order to grow. A big issue is that they’ve lost market share to trucks because of rail service issues. Railroads have tried to address the volume issue by tackling some loose car opportunities, for example, but the below graphs tell the truth: the rail industry hasn’t had success, and railroads need to provide better service to shippers, as well as more competitive rates. 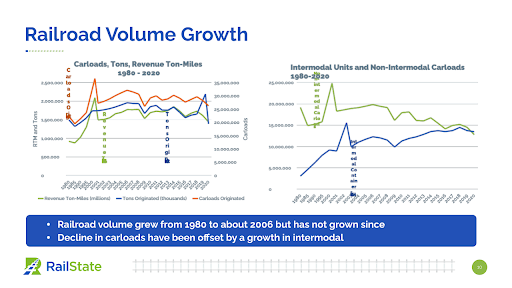 Investors also need to look beyond the operating ratio, and work to change their attitudes toward growth.

The slowest thing to change within the railroad industry? Attitude and culture. Real change will only come from gradual progress over time, and both of our panelists acknowledged this. They remain hopeful, however, that the industry can identify its pain points and work toward solutions.

This is exactly our goal at RailState. We want to give everyone who benefits from rail the network visibility necessary to improve their service experiences. Our real-time data fills a major hole in the supply chain gap, benefiting both individual shippers, as well as the overall supply chain. It helps you identify issues at the edge, so you can reroute or delay your shipments. Our goal? To encourage growth within the railroad industry by embracing innovation.

To learn more about RailState, watch our brief informational video.